Starbucks’ union battle is getting aggressive and expensive, and Wall Street is backing away 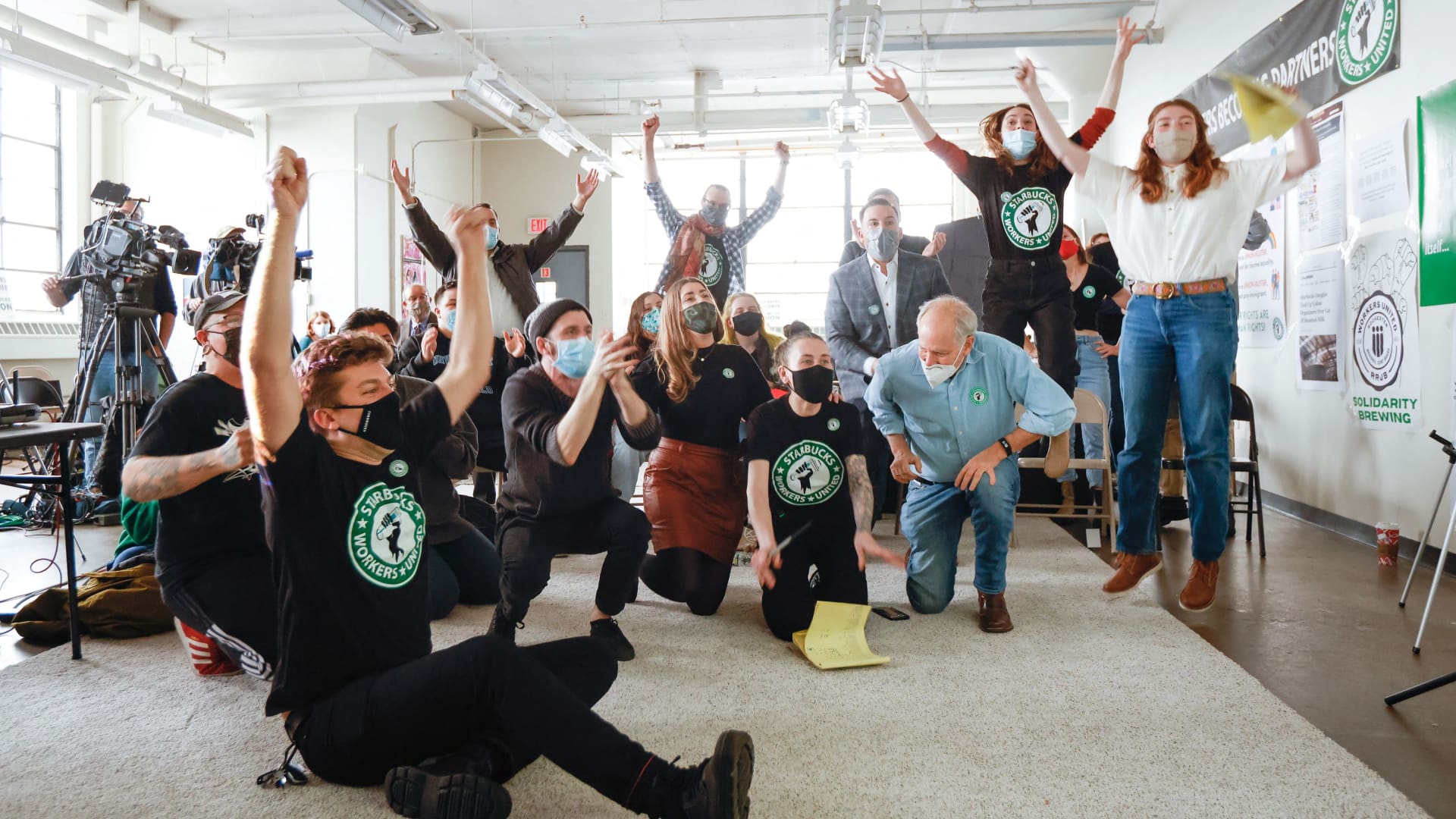 When Starbucks announced Howard Schultz would return to the company as interim CEO, investors cheered. His first tenure as chief executive turned the company into a global brand and his second, years later, revived both the business and its stock price.

But the applause has since quieted as Wall Street forecasts that the coffee giant will keep spending money in its effort to stem a unionization tide.

The stock has slid 12% since Schultz took the reins on April 4, dragging the company’s market value down to $92.2 billion. The S&P 500 fell just 2% in the same time period. Wedbush Securities and Citi Research both downgraded shares to neutral ratings in April, citing the labor situation and other concerns.

In late August, company-owned Starbucks cafes in Buffalo, New York, petitioned the National Labor Relations Board for a union election. Since then, more than 200 of the coffee chain’s locations have filed the paperwork to unionize. To date, 24 stores have voted to unionize under Workers United, with only two locations so far voting against.

To be sure, these locations represent a small portion of Starbucks’ nearly 9,000 company-owned U.S. cafes. But analysts and industry experts are concerned Schultz isn’t taking a frugal approach to curb the union push.

“It’s hard to avoid the reality of the situation – that addressable problems in the near term are probably much more expensive and time consuming to bear results,” JP Morgan analyst John Ivankoe wrote in a note to clients on April 11.

In October, when Kevin Johnson was CEO, the company announced two wage hikes for all of its baristas that would take effect this year and bring its average wage up to $17 per hour. In late March, Starbucks Workers United warned Schultz could leverage those improved benefits in an attempt to curb the union’s campaign.

Starbucks did not respond to a request for comment at the time, but Schultz appeared to confirm the strategy on his first day back on the job when he announced that Starbucks would suspend all stock buybacks to invest back into the company’s people and cafes.

In meetings with U.S. store leaders last week, Schultz said the company was weighing improved benefits for all its workers, but that federal labor law precludes the chain from giving higher pay or making other changes to the terms of employment for unionized workers. Labor experts say that’s technically true, but Starbucks can still ask the union if those baristas want the enhanced benefits.

Higher benefits could dissuade baristas from organizing, but Wall Street is worried that strategy may come at too high a cost.

Citi Research analyst Jon Tower wrote in a note on April 11 that either wage hikes or growing momentum behind the unionization efforts would make him more bearish on the stock.

“Starbucks has made the job of being a barista so much more challenging that even if they ‘solve the wage and benefit issue,’ I don’t think that’s necessarily going to stop or slow down the unionization push,” said Nick Kalm, who has advised other companies on how to deal with unionizing workers, strikes and lockouts as founder and president of Reputation Partners.

While organizing baristas have mentioned the low pay gains for more senior staff and other benefits issues, contract negotiations at its Elmwood location in Buffalo, New York, have focused on “just cause” firing, stronger health and safety policies, and allowing customers to tip with credit cards. The union is planning to ask for higher wages and benefits as well.

With each new union counterstrike, Starbucks is also risking its long-held reputation as a progressive company.

“Our conversations with several union experts suggest that the greatest financial risk to Starbucks is market share loss and deterioration in brand perception if the union battle continues to make headline news,” BTIG analyst Peter Saleh wrote in a note to clients on Wednesday.

Saleh lowered his price target on the stock from $130 per share to $110 but maintained his buy rating.

The Seattle-based company garnered a reputation as a generous employer by offering its workers health care, paid leave and other benefits decades ago, a rarity in the restaurant industry at the time and even today. The company has also been vocal in its support of same-sex marriage, hiring refugees and other liberal causes, further bolstering its image as a bastion of progressive capitalism.

While conservatives have threatened boycotts of the company before, its stances drew in progressive employees – like those pushing for a union today – and customers.

But the union has alleged union-busting activity by the company, including firing organizers and cutting barista hours at unionizing locations. The NLRB has filed three complaints against Starbucks, alleging that the company illegally retaliated against organizing baristas. Starbucks has denied all allegations of union busting and filed two complaints of its own with the NLRB on Wednesday, alleging that the union broke federal labor law by intimidating and harassing its workers.

If your whole mantra is being a very progressive company, it becomes very difficult for you to reconcile strong anti-union messages with that.”

president and founder of Reputation Partners

Starbucks’ response to the union push could turn off investors who pick stocks with environmental, social and governance values in mind. An investor group led by Trillium Asset Management urged Starbucks to adopt a neutral policy toward union efforts. The group said in March that it holds at least $1.2 billion in Starbucks shares.

“If your whole mantra is being a very progressive company, it becomes very difficult for you to reconcile strong anti-union messages with that,” Kalm said. “And that’s where they’re finding themselves, and it is going to take a reputational toll. Now, at the same time, people are strangely addicted to Starbucks products.”

One such conflicted customer is Clarissa, a 33-year-old in Taos, New Mexico, who describes herself as “a bit of a peppermint mocha or blonde roast addict.”

She hasn’t patronized a Starbucks cafe since Feb. 13, citing how the company has dealt with unionizing workers. Her personal boycott breaks a two-decade-long streak of visiting the coffee chain at least five times every week.

“I still have $6.70 on my Starbucks Gold card that is likely just sitting there because I won’t go back after their union busting,” she said.

But not everyone’s soured on the company. BTIG surveyed 1,000 Starbucks customers on their allegiance to the coffee chain if it fails to agree on a contract with Starbucks Workers United. Only 4% of respondents said they would never visit a Starbucks again, and 15% said they would visit less frequently.

More than two-thirds of consumers surveyed said it wouldn’t impact their visit frequency at all.

Neuberger Berman analyst Kevin McCarthy said he’s sticking with the stock because of his belief in the company’s long-term prospects under Schultz’s leadership. The investment firm had $460 billion in assets under management as of Dec. 31.

“It’s the Howard 3.0,” McCarthy said. “I’m hopeful that his credentials and historic track record with being able to come back to the business and reinvigorate will be constructive for the company in the long term.”